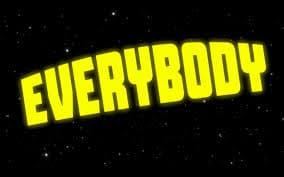 Premiered four days ago on Ultra Music, here's a fun video for Joachim Gerraud and Parry Farrell's new track “Everybody” featuring Etty Farrell. Parry Farrell is well-known as the front man in the 90's alternative band Jane's Addiction and he is also a DJ. Etty is his wife and she gives the two superpowers in the video.

Essentially the track features the duo saving their planet from stationary movement in an old school Sci-Fi Adventure video in the style of Flash Gordon. Check it out and look for the release of “Everybody” in three days on Beatport (to be released March 14th). This is Joachim Gerraud's second release on Ultra Records. He is currently playing shows at South by Southwest in Austin, Texas. Gerraud has become famous for live music improvisation along with DJ'ing a set and has recently collaborated with artists like David Guetta, Kylie Minogue, David Bowie, Moby, and others. Here's the video:

In this article:Etty Farrell, everybody, Joachim Gerraud, Perry Farrell, Ultra