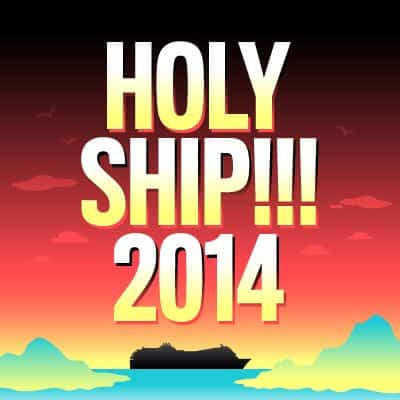 Did that just happen? Even after being off Holy Ship!!! for a couple days my brain has still yet to comprehend exactly what just took place during those three days aboard the MSC Divina. Holy Ship is less a Music Festival and much more a bonding experience, bringing together a group of four thousand people into one collective family known as ‘ShipFam’.

I honestly must say that term is used for a reason. Holy Ship!!! makes you feel part of something bigger and those positive vibes are tangible from just about anyone you meet on board. I must admit I’m a social creature, but even I was overwhelmed with the amount of friendliness from everyone including the artists. Speaking with artists such as Griz and TJR took little effort as they were excited to be part of the spectacle as much as the shippers.

The Festival kicked off with Diplo, who set the tone by creating a formula that would be replicated many times, masterfully mixing upbeat and dancey tunes. His first track was appropriately ‘Sail Away’ and that’s exactly what happened to both mind and spirit over three days. The highlight of that first night took place in the Ship’s Theater.  After Zedd played a killer set the surprise guest was announced and that happened to be Tiesto; which lead to A-Track, along with Skrillex, Zedd and other artists dancing wildly and even forming a conga line behind them. That night I stayed up until 4:50 AM to catch a late night set with Gina Turner B2B Laidback Luke and was not disappointed. Their deep house beats in the ships Galaxy Disco kept the party going strong until 6 in the morning.

Zedd in the Theater

Rest is not really a priority on Holy Ship!!! as it was imperative for me to be up for the first Private Island Party. Disclosure had the set of the day with the highlight being a deep house version of ‘White Noise’ that truly pleased the ears.  That night the spotlight was again on the Theater where bass flowed with pumping sets by Baauer and Flosstradamus. The next to play was Dillion Francis, and as covered in an earlier story, he hit a snag. Yet, the party did not die as a group of artists including Flosstradamus and Crookers bonded together to save the night.

Baauer in the Pantheon Theater

Again, sleep was not be had as the second private island party started off strong with an 11 AM set by Ryan Hemsworth. This was followed by some serious scratching by A-Track, a rebounding set from Dillion francis, and a 2 hour set by Skrillex. Pharrel Willaims joined the party and played his popular hits on the beach to end the last day. The final night was a constant flow of bass, a serious rap party with RL Grime and Bauuer, and an exclusive Tiesto deep house set in the Disco. I highly recommend going to Holy Ship!!! Currently I’m super sick and I deserve no sympathy from anyone, but going all out was well worth it.