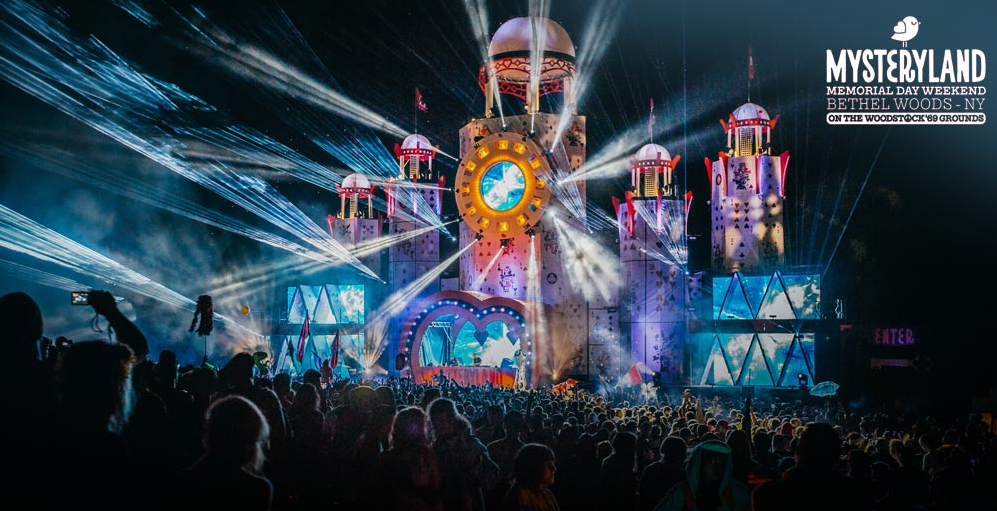 Today the U.S. edition of Mysteryland is excited to announce its FULL musical lineup for their year at Bethel Woods Center of Arts. The same site of the legendary 1969 Woodstock festival this Memorial Day Weekend May 22-25, 2015.

It is known as one of the longest-running electronic music festival, the lineup supports of genres and talent from all spectrums in the dance music sphere. Mysteryland’s powerhouse headliners consist of Diplo, Dillon Francis, Empire of the Sun, Kygo, Porter Robinson (live!), Robin Schulz, and special guest Madeon bring a wide range of sounds that will keep more than 25,000 daily fans dancing throughout Memorial Day weekend on Woodstock’s hallowed grounds.

Fans can gather around the Main Stage and have their minds blown away by this year’s artists that consist of Classixx (DJ set) Claptone, Netsky (live) and The Machine, plus Bob Moses (live), Goldish, Oliver, Olivier Weiter, Ricoshëi and Tesla Boy. This year the MainStage will feature a must-see live performances from the sensational duo Empire of the Sun, Porter Robinson and Netsky all playing live! Porter recently described his own live show to The New York Times, saying “I'll be singing and triggering samples and running multitracks and playing keys… it’s kind of a more sensitive experience.” Also a completely newly designed of the Main Stage that will debut at the U.S. and then making its long journey to other Mysteryland editions later this festival season in the Netherlands and Chile. The festivities will close with a special grand finale closing ceremony with fireworks on its final day (Sunday night) to celebrate the end of another unforgettable weekend.

Holy Ground camping’s official 2015 theme of “Camp DoYaWannaDance” inspired by old school summer camps and classic games (giant drinking Jenga, Connect Four and beer pong), hamster ball soccer, a 20-foot inflatable slide, both morning Deep House Yoga and AcroYoga classes. On Friday, May 22, the first unofficial day of the festival kicks off with a pre-party with three different stages which are called The Camping Circus, and in celebrating the first official opening party, hosted by a special headliner (to be announced). The NYC bus, expanded to 3 art cars which will include an after-hours silent disco; and new for 2015, and the Pineapple Paradise stage hosted by New York locals Brunch Bounce and The Breakfast Club morning parties hosted by Saved By The 90’s.

Mysteryland is a great place to discover new music, that is where I discovered a lot of new artists from last year. Its not only about music, its also about the arts, culture, discovering new music, trying new things and food, and most all making powerful and unbreakable friendships. It continues with a long tradition with three dedicated stages each day to explore at the US edition.

The Mysteryland USA festival will take place on Saturday, May 23 and Sunday, May 24, with the Holy Ground campgrounds opening on Friday, May 22 through Monday, May 25 with exclusive activities for campers.

Mysteryland  tickets and camping are available HERE, while supplies last. Holy Ground camping is 85% sold out, Friendship camping is 100% sold out! Don’t be a Lazy Duck and wait till the last minute, with a lineup like this tickets will sell out FAST!

EMPIRE OF THE SUN

Q-DANCE CONTEST WINNER – TO BE ANNOUNCED!

THE BAYSIDE TIGERS PRESENT SAVE BY THE 90'S

After a year of nearly zero live music, one of the veteran music festivals has recently announced they will be back in full force...

This year Lollapalooza cancelled their in-person event due to COVID-19. However, that won’t stop the nearly 30 year old festival from carrying on virtually. A...