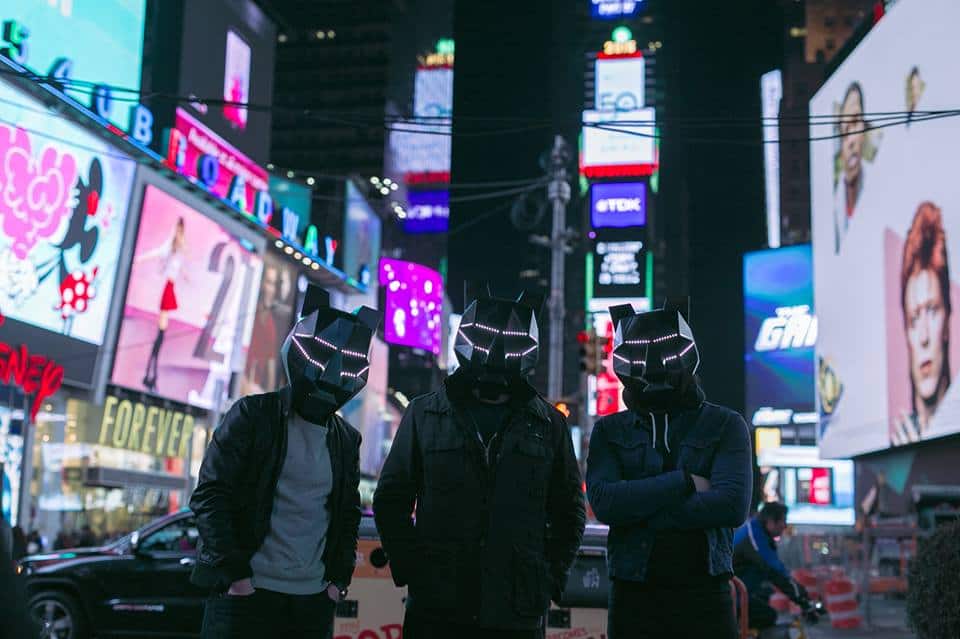 This past Saturday Black Tiger Sex Machine brought their live show to America for the first time ever. The trio played Webster Hall in New York City and showed the general populous what they were capable of in a stunning way. Bass, Anger, Chaos, Passion, Energy, and Intensity are words that come to mind. But the general idea that I could not shake the entire evening was this: Black Tiger Sex Machine and their live show were like a defibrillator to an EDM scene that has been starting to flat line. Innovation is something that can be hard to come by in the culture of main stage festivals and Beatport Top 10 charts. But the Kannibalen front-men showed they are much more than just three guys in tiger helmets.

The night started off with BTSM's label partner Apashe opening up the show. The mind behind the now world wide phenomenon ‘No Twerk'. Apashe has also recently gotten some more international recognition as his song ‘Battle Royale' was featured in an Adidas commercial.

Apashe's set was pure insanity. There really is no other world to describe it. His attitude and stage presence was a force to be reckoned with. About half way through his set he started to play out the build to the now infamous ‘Animals', and as the crowd reacted positively Apashe held two middle fingers high denouncing his association to the main stream. The drop provided explanation to the build with grinding heavy metal, industrial sounds as his visuals switched to dominatrix, leather bound women. The entire scene was a giant F*CK YOU to the main stream and set the tone for the night of unforgiving genre desecration. Apashe made it clear that in no time he will be headlining his own performances across America.

As 1:30am hit Black Tiger Sex Machine came to the stage decked out in their classic LED tiger helmets and while the crowd as ecstatic, it was clear nobody saw what was coming next. BTSM performed with drum pads, keyboards, CDJ's, and launchpads. They played out some songs and deconstructed parts with the instruments while also mixing others with the decks. The shear intensity of the set was overwhelming at points.

I remember turning to my friend mid way through and having him yell towards me, ‘I forgot Electro this good existed'. That's the thing…so did I. I forgot I could go to a show and hear stuff that I had never heard before and absolutely fall in love with it. BTSM played out Riddim, DnB, Trap, Hybrid, Dubstep, Electro, Bounce, Hip-Hop, and everything in between. It was a full frontal assault on what is expected at an EDM show in the best way possible. It was truly the best show I had ever seen in the Webster Hall Ballroom. And I have seen some damn good shows in that ballroom. BTSM closed with an unreleased song that literally made a few people around me drop to the floor in total astonishment. The sound design is next level. But then again, that is what Kannibalen is known for. If you want a bold prediction for 2015, it is this: These guys are on the edge of absolutely exploding. If you are lucky enough to be graced with a show in or around your area, get to it. You will not regret it. I definitely didn't.

After well over a year and a half away from the stage, established talent Apashe has announced his grand return to live events with his 6-date...

Apashe Teams Up With Young Buck & A Symphonic Orchestra for ‘Work’