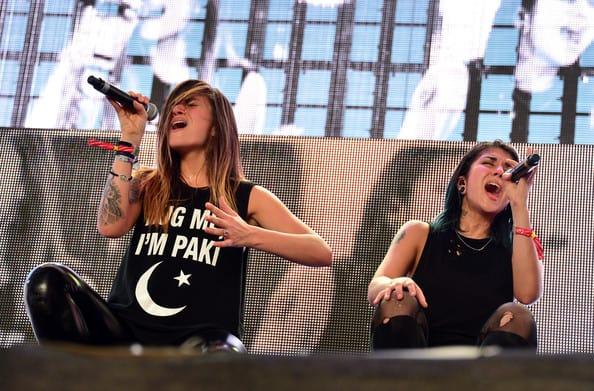 It's probably time for Krewella to update their Twitter profile pic.

The EDM scene erupted into shock when the news broke that Rain Man, one-third of the popular EDM trio, Krewella, was suing the other two members for allegedly kicking him out. Many laughed at the misfortune in amusement or just sociopathic trolldom, others made their jokes about Rain Man’s newly-discovered unemployment and/or Jahan and Yasmine Yousaf’s alleged betrayal towards their friend, but on the serious side of things, many have expressed their thoughts that the Yousaf sisters allegedly evicting Rain Man is self-sabotage, and that Krewella will shrivel and die due to such a foolish move. But whether or not Rain Man left at his own behest (like the Yousaf sisters currently claim) or was kicked out (like Rain Man claims), Krewella will do fine without Rain Man, and when you look at the big picture, the shifting dynamic of the group interestingly portrays why things have led up to this moment.

When Krewella were first making music, they were a DIY dance music ensemble: just an enthusiastic group of friends who wanted to reach their dreams of making music that would be blasted through a soundsystem to the pleasure of a smiling, substance-influenced crowd. There was Kris Trindl (referred to professionally as Rain Man), who was the humble bedroom producer and essentially the compositional backbone of the trio, and the other two members, sisters Jahan and Yasmine Yousaf, took the duties of composing lyrics and vocals.

From the beginning, Rain Man could have done without the elements Jahan and Yasmine brought to the table and tried to grind as a lone bedroom producer making aggressive electro music that was snowballing in popularity in America at the time, much like droves of other bedroom producers. He could have stayed a single entity and perhaps recruited the Yousaf sisters- on occasion or frequently- to lay down vocals for his tracks, but he technically never needed to make his music career as an ensemble with the Yousaf sisters.

There’s two reasons that one can safely assume as to why Krewella wanted to be a trio in the first place: 1. They were friends with their eyes on the same dream, and they wanted to chase it and hopefully catch it together – and what better way to strive towards an ambitious goal than to do it with people you trust and care about? And 2. Both Rain Man and the Yousaf sisters worked interdependently – Jahan and Yasmine may not have been able to be their own beatsmith, but Rain Man also certainly couldn’t have fulfilled any vocal duties himself (or at least to the same caliber as Jahan and Yasmine), so both Rain Man and the Yousaf sisters were symbiotic as a whole.

Now, one might say- scratch that, plenty are saying- that Jahan and Yasmine would be nowhere without Rain Man, because the brass tacks is that Rain Man was making the music, and without that, no one would have heard of Jahan or Yasmine. However, one needs to take a look- not even a deep look- into the group’s breakthrough single, “Alive,” to understand how important a role Jahan and Yasmine played in Krewella’s success two years ago. “Alive” became immensely popular not for its musical prowess, but because of its infectious topline, written and sung by Jahan and Yasmine. People weren’t frequently listening to “Alive” to admire Rain Man’s meticulous and brilliant production value; they were listening to it to sing along to the chorus because it was fun and it wasn’t hard to. It’s addicting, it’s positive, it’s insignificantly profound, and it’s exactly the kind of breakthrough hit needed to usher Krewella into pop-stardom.

After “Alive” had been played for the hundred-millionth time nationwide, things for the trio started to metamorphose in a grand way. Krewella were getting more and more performance opportunities, then they started getting more exposure from mainstream media, and then of course, Record Labels chased after them with fistfuls of cash. This was the dream they were looking for, so they took all that they could – they took the deal with Columbia Records, they appeared on every media promo opportunity they could, and they took as many performance opportunities as they could. This may seem like an unfair portrayal of Krewella only being about the money, but when a group tries to pull a double-booked night where they perform at one city for their NYE celebration, then hop on a private jet to hastily high-tail it to another city in an earlier time-zone to perform another show that night, it’s a fair inference to make.

Which leads to the phasing out of Rain Man. One could apply the simple math that’s used amongst a group of bank robbers to this situation- the less people involved in the Job, the bigger each person’s cut will be- though that's more crass of an analogy than need be. In fact, it's more likely that it was originally the label's desire to cut Rain Man loose, so that Krewella would only be two mouths to feed, so to speak, and when looking at the state of Krewella at this point, Rain Man's involvement can be perceived as superfluous. At this point, the focus of Krewella was being further drawn on the Yousaf sisters- their infectious, accessible singing, and their wild image- and the group's shows were centered on Jahan and Yasmine's live performances, rather than the trio huddled around CDJs. Whether or not Rain Man knew that his role in the group was becoming obsolete is anyone's guess, but the bleak future for him was forecast like a blanket of dark clouds. Krewella weren’t going to stay as the DIY dance music ensemble from Chicago forever, and they were moving closer and closer to fully-fledged pop stars each day. And pop stars don’t need a designated producer. Oh, how the tables have turned.

The people that think Krewella (now just the Yousaf sisters) have doomed themselves for kicking out the “only musician” in their group have ill-conceived notions. Do they think that Beyonce or Rihanna or Katy Perry are their own producers of their tracks? No. They’re pop stars. Their top priority is to be performers, and the duties of composition are, for the most part, taken by a group of oftentimes unnamed producers and co-writers. Krewella is now in the position to utilize the same kind of labor here; labor that can be culled by Columbia with the snap of a finger (hell, they're currently working on their follow-up album in the midst of Rain Man's absence). Think of how many producers have already collaborated with Krewella, and think of how many more producers, both brand-name and unknown, would kill someone to be able to work with them on a song. Rain Man’s role in Krewella can now easily be replaced with a series of producers hand-picked by their label’s A&R (with some encouragement from Krewella and their management, perhaps).

One can analogize this with the ubiquitous pop-punk band Paramore: founding member Josh Farro claimed that only the iconic frontwoman, Hayley Williams, was signed to Atlantic Records — not the band as a whole, making the other members of the band basically disposable. It’s this reason why he and his brother Zac, who co-founded the band with Williams, left the band – they were aware that the label was only interested in Williams because she was the primary force and appeal of Paramore, and instead of continuing to ride on a ship where their involvement was ill-valued and fate was uninsured, they left with a sense of dignity and acknowledgement that Paramore was far different from what it began as. Krewella have now shown to go the same route with the loss of Rain Man — with the Yousaf sisters being the primary force and appeal of Krewella, and with any future roles of production now being easily given to other producers as a recruitment job, Rain Man can be seen as expendable; but once again, whether Rain Man chose to leave Krewella or was cast aside against his will is still unconfirmed.

Rain Man suing the Yousaf sisters in response to them allegedly ousting him from Krewella is absolutely understandable, and anybody in his position would most likely take the same action. However, many of these cases of members getting wrongfully kicked out of their band don’t bloom into righteous redemption stories of cinematic grandiosity, usually just out-of-court settlements that are highly compromised from the plaintiff’s original demands. Also, Rain Man probably isn’t suing the Yousaf sisters as an ultimatum that will hopefully result in his rejoining of Krewella and trying to make this dark period of separation water under the bridge – legal actions act more as kerosene and a lighter to said bridge. But whether Rain Man is suing as a Twisted-Sisterian act of not taking what he feels to be an injustice, or simply trying to get one last large paycheck from a group he helped incept, Krewella will be moving on without him, whether he likes it or not.

This doesn’t mean Rain Man’s career is over, though. When you get to say you were the original producer for Krewella, that makes your résumé more impressive than plenty of other producers, and whether he wants to go solo as a DJ/producer in the dance music scene (he already has plenty of popularity there), or try becoming work-for-hire with other pop stars (clearly he’s shown he’s capable of producing a Top 40 hit) is up to him. But if he wants to show the world that he deserves to be respected for his role as a producer, suing the Yousaf sisters won’t accomplish that; being a musician will, and if you’re one of many that think Rain Man was the reason Krewella got anywhere at all, it’s better to support his future music endeavors rather than to throw shade and sexist comments at the Yousaf sisters.

As for the new Krewella, they show no signs of ceasing to exist and seem fine looking at their future as a pop duo, and the only reason if and why they fall from popularity in the future won’t be because of Rain Man’s absence, but for the reason any pop star fades from popularity – the people have moved on. So long as their music and performances keep drawing a big audience, they’ll stick around, and life will go on.

In this article:krewella, Rain Man