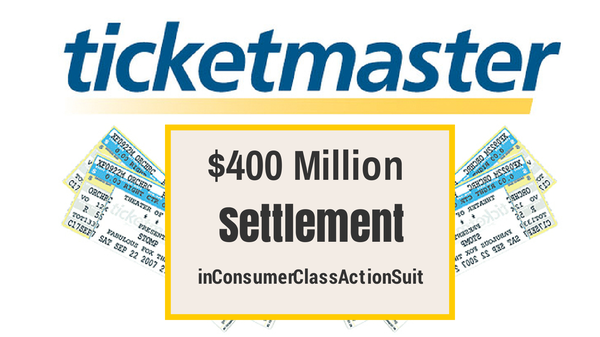 Ever feel screwed over by Ticketmaster's order processing fees? Well you are not alone. Ticketmaster has agreed to a tentative settlement in a class action lawsuit that if approved would issue a total of $400 million in credit to over 50 million ticket buyers.

“If the Ticketmaster settlement is approved, some 50 million fans in the U.S. who purchased tickets that included an “order-processing fee” on Ticketmaster‘s website from Oct. 21, 1999, through Feb. 27, 2013, will be eligible to receive a total of $386 million in discounts on future purchases,” says Billboard.

The lawsuit against Ticketmaster was originally filed back in 2003 and talked about misleading consumers by charging “order processing fees” and a UPS “delivery fee” that the company didn't actually spend their money on.

As part of the settlement, Ticketmaster has changed the language on its website to clarify that order processing and delivery charges may include a profit for Ticketmaster.

BREAKING: ARTY Sues Marshmello For Copyright Infringement Of His Remix of One Republic’s ‘I Lived’

News has broken that Russian producer, ARTY has officially filed a lawsuit for copyright infringement against Marshmello. The suit stems from the similarities in...

Singer Drops Lawsuit Against Skrillex and Justin Bieber Over ‘Sorry’

The lawsuit against Skrillex, BloodPop, and Justin Bieber has officially been dropped. Back in 2015, Justin Bieber teamed up with a handful of artists...

Back in February of 2014, Skrillex stage dived during a performance in Downtown Los Angeles. As a result of jumping from the stage, Jennifer...