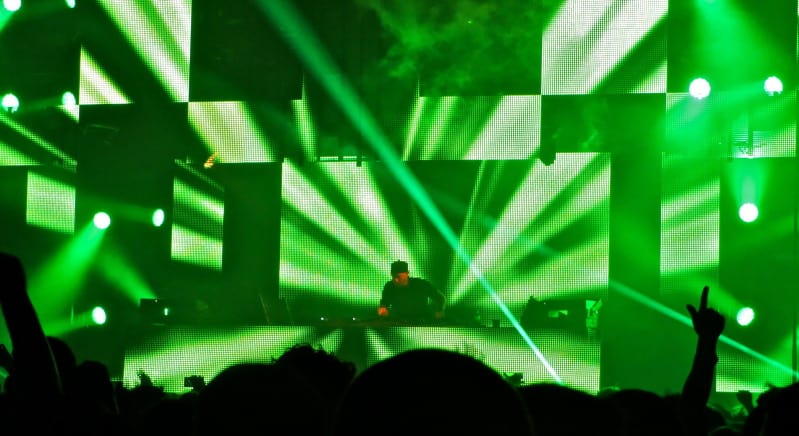 EPIC: extending beyond the usual or ordinary; extraordinary; momentous; impressively great. A word so overused these days in which its meaningful definition and correct applications are now obscured. But on Saturday night, seeing Eric Prydz In Concert made me restore the faith in what EPIC truly means.

I was excited to see what the renovated Hollywood Palladium looked like. Last time I was at the Palladium was roughly a year ago, when I saw Gramatik and Bassnectar. But this was a different kind of show. When I was driving by the iconic shiny sign that read “Eric Prydz presents EPIC 2.0” before I could park, the line was so long it was almost around EL Centro Ave. It was a LONG line… but definitely one worth waiting in.

The weekend before this show I was at Hard Day Of The Dead, where I had the chance to see Eric perform on Sunday night under his prog house alias. Because, as the genius that he is, he performs as three completely different people… different personalities. None of his shows are the same. I remember telling my friend during Hard: “Only a legend has two sets in the same festival in premiere time slots.” I was eager for his dark alter ego, the one set I missed as Cirez D because I was watching Sonny perform for the first time, inside a huge pumpkin.

Opening for Prydz were Pryda friends Jeremy Olander and Fehrplay, warming up the crowd with hits like Fairfax/Rypamont, Phantom and Maor Levi's Holdin' On. They had the Palladium feeling like a normal Hollywood dance club before midnight, with a lot of room to dance. But then, 12:00 AM hit… the dance floor rapidly starts to fill up. By 12:15 AM the atmosphere changed, as Eric's set got closer. The atmosphere changed, and so did the beats. It was time.

All of a sudden, everything went dark. The crowd suddenly lightens up as Eric's face comes up rotating in 3D visuals, and a typing like sound filled our ears as the letters start showing up next to his face, forming the sentence: EPIC 2.0 INITIATED. My mind was blown. It felt like I was in a Matrix movie, or perhaps about to embark in a space ship. The amazing thing about this all… he is doing it all LIVE, it's all him.

He opens the set with Rotonda. He mixed for a solid 1.5 hours, and all I kept thinking to myself was: “I never want this to end.” His combination of Cirez D persona, holograms of the iconic Black Dice to enact his residency in Las Vegas, Lazer Beams, Layers, Pjanoo, the powerful and groovy Power Drive, and the holograms in the background all portraying a different story. Looking around at the crowd I could see everyone losing their ability to control any inhibitions;, it was purely carnal.

One of the highlights of the whole night was when he played his remix of Depeche Modes' Personal Jesus… and the beautiful holograms displaying religious imagery reminded me of when I lived in Europe and visited the Monestery of Jeronimos in Lisbon, Portugal. A breathtaking vision that made me travel back in time. He closed his set with Midnight City, after the crowd pleaded for one more song.

Eric took me to a place a DJ has never taken me before. That was the definition of wonderland to me. Although this genre may not please the masses, and may not be everyone's cup of tea (I have read negative reviews on this show), you should open your mind and experience an EPIC show at least once.

Video Source: Props to my friend Jordan for the video below.

Advertisement. Scroll to continue reading.
In this article:Eric Prydz