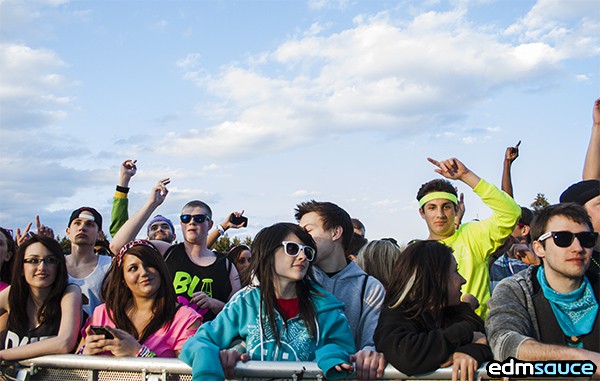 On Saturday April 13th, Boombox Festival, presented by AOE, kicked off spring festival season in Pennsylvania with their one day multi-stage production on Tussey Mountain outside State College. While the weather may have still been a bit chilly, the electrifying acts, stunning visuals, and pristine scenery kept people moving and the crowd full of heat. Upon arrival at the ski lodge area turned festival grounds, the stark contrast of majestic natural mountainscapes and industrialized sets, blaring man-made electronica, turned your senses on overdrive.
When we arrived Brass Knuckles, made up of Miami trio D'Brito, Tony Livadas, and Anthony Piano, was in high gear blasting signature remixes of “Lie to You” and the Jets pop hit “Crush on You”. Offering a unique band like quality the group featured live synth keyboarding and killer electric guitar shreds. Finishing with high notes of original songs “Bad Habits” and “Hurricane” the trio transformed the crowd into bouncing, smiling ragers, roaring for more.

The festival also offered a look into up and coming acts on their smaller Mountain Stage. Acts like Perkolators/Rubix Cubed, a psychedelic, trap inspired collaboration featuring live drumming, and Twin Syndrome, the dynamic duo of identical twins, Kyle and Kevin Ursic, who spin party tracks of dubstep and electro-house, were featured as an alternative to the more established acts of the main Boombox Stage.

Up next on the main stage was crowd favorite and international house and trance trailblazer Markus Schulz. Energized and excited to be in front of such passionate fans, Schulz paired simplistic, graphic visuals with thunderingly loud trance signatures like “Rotunda” and hit “Love Rain Down”. The frenzied colorful crowd delighted at the smooth Synth transitions and fast paced bass drops, and beg for more. Transitioning from house to trance growing more complex with his beats and visuals Schulz's set climaxed with a stunning image of a woman made of lights and hands clasped in reverence, as if to say thank you for the shared experience from crowd to DJ. This thanks was then shared as Schulz walked the barricade and spoke and posed with spectators before hitting the road for another set later that nigh at Echostage.

As the sun began to set over the trees on the picturesque mountain side the bass echoed off the stone surroundings as Toronto based duo Torro Torro took to the stage in a flurry of flashing lights. Made up of Mike “Digits” Gonek and Evan “Yo Ev” Norton, Torro Torro combined hip hop and EDM with their own crowd kicking flavor. Blasting this writer's new personal favorite remix of “Go Deep” and the moombahton banger “Gotta Know”, Torro Torro gave the show a mix of creativity and adrenaline unique to themselves to propel the night into overdrive.

When darkness descended upon the mountain, and the LEDs, glow sticks, and light up hula hoops sprung into action, Lazy Rich took the stage with one of the most illustrative visual displays of the day. As a cityscape in hues of red and orange scrolled and segmented on the screen the ever funky radio edit of “Sundown” blared through the already abused speakers. Remixing crowd favorites such as Zed's “Spectrum” and Bruno Mar's “Locked out of Heaven” this newcomer to the US scene was a solid performer with a well rounded presentation of sound, cityscapes, and yes even dancing ladies.

The final two acts of the night really solitified the festival as the hidden gem I had never expected to find in Central Pennsylvania. When the drunken bear logo appeared on stage it was clear that for the next hour Crizzly was about to control the crowd with his crunkstep mixes and crazy antics supplied by a mystery rapper known as “the Hypeman”. Starting out with a rally cry of “Hands Up” they fueled the already feisty late-night mob. The DJ and rapper broke out ruthless remixes of classics like “Chain Hang Low,” “Big Booty Bitchezz,” and Lil Flip's “The Way”. Finishing with an explosive scene of smoke, girls, and a fire that drove the Hypeman to launch himself into the crowd, Crizzly hit Boombox with a force likely unseen on the mountain before.

Finishing up the night was dubstep phenom Datsik. As a puzzle of metal pieces whirled across the stage, and the bass boomed low and vibratory, Datsik appeared in a glow of blue light. Psyching up the horde of amassed grinding bodies, Datsik yelled out a calling to get ready and threw down his signature ratatatt beat. Songs like “Deviance” and “Firepower” showcased not only the range of this Dance floor detonator, but the influences rappers like Wu Tang and rockers like Jonathan Davis had on his music. After a mind blowing set featured an hour of heavy, tarnished beats, Datsik left the crowd, hungry for more, to traverse down the mountain and for the few uber-dedicated, stamina saving fans, the opportunity to catch and second set, and another chance to catch some acts at the Boombox after party at Levels Nightclub.
Overall the event was seamlessly presented, with a relaxed staff, and no apparent incidents to speak of. Every artist appeared completely stoked to be performing for the crowd of fanatical supporters and I hope to see more events like this taking place on the smaller scale around the Central Pennsylvania area.

Check out all our photos within the next few days here:
www.facebook.com/edmsauce
G+