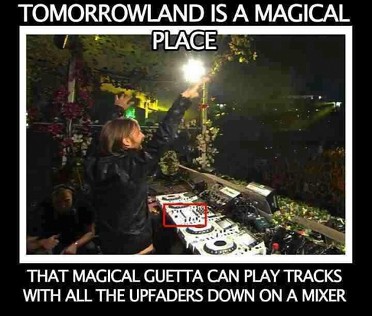 We loved being at Tomorrowland, it was a fantastic event and we super enjoyed it. And as many of you know, a lot of festivals lately are being recorded and/or broadcast live, both officially and by everyone who has a decent iPhone. Anyway, apparently while reviewing and watching the playbacks of Tomorrowland, some sharp eyed viewers caught wind of something unpleasant… David Guetta‘s faders were all set to zero. For those of you who remain ignorant of mixing and ‘turntabling' – if the faders are set to zero, the music wouldn't sound like that.
So.
What does that mean?

It means basically everyone and their brother is now questioning David Guetta's performance. Did he fake it? Was it some kind of mistake? This is amazing timing, considering my review of what DJs I wasn't voting for this year… but I digress. The PR folks at Tomorrowland hastily released apparently uncoordinated statements saying that the faders were at zero because:
-there were fireworks planned!
-there was a power outage!
But DG and his PR team have said absolutely nothing. Which is weird. Perhaps the mentality there is that it's “ridiculous” and so they don't need to bother with answering the allegations.

Here's the thing. This absolutely is not the first time that a DJ, in fact, David Guetta, has been accused of not really DJing whatsoever during his performances. Earlier in the year, people were remarking online how transitions “magically” occurred with DG's hands up in the air. Rather curious. He put them down of course, but he was about a second too late.

Does it really matter, though? DG is without a doubt, a great producer and remixer. I would argue that I can buy DG's tracks online. What I paid for at Tomorrowland was to see a performance of the music. That's why it's not 99cents to hear the song but rather $50 freaking dollars. Right?